From Dosan-Wiki
This is the latest revision of this page; it has no approved revision.
Jump to navigation Jump to search

Historical background for each level


Back to Welcome Page

THIS MUST BE ALWAYS KNOWN, EVEN BEFORE THE FIRST EXAM FOR THE 9th KUP !!!

Korean is read from top to bottom. Taekwondo in Korean consists of 3 characters.

Behaviour in the Dojang (CLUB)


On entering and leaving the dojang: greetings are mandatory. Greeting is expressed by bowing.


In the dojang, discipline must be followed. The Instructor does not leave the dojang during class unless exceptional circumstances appear.

The turtle is the symbol of Taekwondo. A turtle symbolizes longevity (because she is old), so as the long life of Tae-kwon-do.


She has a hard shell and, therefore, she is protective and comprehensive. All the colors of the belts are built in it.

Why do we greet ?

We salute to show our respect when entering and leaving the dojang and a new training partner.


In competition you also greet at first entering the ring in the beginning or abandoning it in the end.


We never turn our back to higher belts on competition, internships, classes, etc.


Exception : While we correct our dobok, we always turn back.


If we give a hand to someone (training, exam, etc.) we put our left hand under our right hand (knuckles under elbow) out of respect and to show that our both hands are weapon-free. 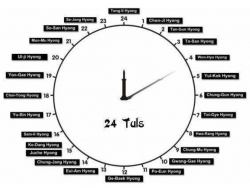 There are 24 patterns (tuls) because the life of a man, perhaps a hundred years,


can be compared with one day (which counts 24 hours) relativing to the eternity. Click on the image to enlarge


Founder Gen. Choi Hong Hi writes: "The pattern represents 24 hours. One day, or all my life. "

Taekwondo is no ordinary sport, such as football or tennis. It is a martial art. Therefore, there are certain traditions and customs of the ancient Asia (in our case Korea) attached to it, therefore, Taekwondo has a certain philosophy behind it. To better understand for what tae-kwon-do actually stands for, here are some important notes about the origins, history, philosophy and principles of this Korean defense art. In the East, more than one martial art exist, they were originally practiced by monks, farmers, etc., they usually had to defend themselves against attackers with bare hands and feet without weapons. Korea was no exception. One of the Korean "martial arts" was Taek Kyon. From 1909 to 1945, Korea was occupied by Japan. The rulers triedto force Koreans to practice their own martial arts (ex. Judo, karate, etc.), for example, by prohibiting the Korean arts. Even though it was prohibited, Koreans practiced their own arts in secret to maintain the tradition for future generations. 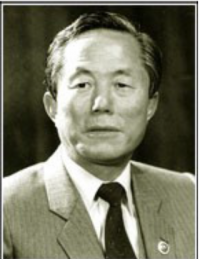 In 1938, Choi Hong Hi (the person who in 1955 will found modern Taekwondo) departed to Japan to study. In two years, he earned a black belt in karate. On his return to Korea, he devoted himself to the liberation of his country, and he was arrested and ended up in a Japanese prison. In 1945, Korea was liberated. Choi became a lieutenant in the Korean army. Increasingly, he realized that Korea had to get back their own martial art. Choi Hong Hi began developing new techniques and late 1954, the foundation for a new Korean martial art was laid down, which was named Taekwondo on April 11, 1955. The spiritual level of Taekwondo is derived from the traditional Korean ethical and moral values.


Even if taek kyon and karate were sometimes used as a reference at the physical level, the techniques, based on scientific principles (especially the laws from physics), show that Taekwondo is a different martial art (ex. wave motion and the relationship strength-relaxation).


Meanwhile, Choi became General, so he introduced his sport first into the army. In 1966 (April 22), the International Taekwondo Federation (ITF) was established. As a result of the political pressure and the growing frictions between North and South Korea, General left again his homeland in 1972; he settled in Canada.


In South Korea, WTF (World Taekwondo Federation) was founded in response. Both forms of taekwondo have the same base but they have grown so much apart that the differences are greater than the similarities.


With the evolution of time and the changing needs of society, The General made more adjustments. The ITF Taekwondo was not only under the influence of its founder, it is also an evolving sport too. On June 15, 2002 General Choi died. Master Tran Trieu Quan (VIII degree then) was elected president of ITF. The present President of ITF is CHANG UNG.


As a summary : Taekwondo was founded in 1955 in Korea by General Choi Hong Hi, on April 11; it was the first time the name "Taekwondo" was used. ITF was founded in 1966. Tae-kwon-do has approximately 3,200 techniques

"CHON-JI" literally means "heaven and earth". It is interpreted in the East as the creation of the world and the beginning of human history. Therefore this first Tul performed by beginners.


The Tul consists of two parts, the first part for heaven and the second for the earth. It contains 19 moves!


REMEMBER at the end : Bring the left foot back to NARANI SOGI

"DAN GUN", is named after the holy Dan Gun, the legendary founder of Korea in the year 2333 BC. This pattern contains 21 movements.
END: Bring the left foot back to narani junbi sogi


The 24 movements represent his entire life which he devoted to furthering the education of Korea and its independence movement.


END: Bring the right foot back to NARANI JUNBI SOGI

"WON-HYO" was the name of the monk who introduced Buddhism to the Silla Dynasty in the year 686 AD.


END: Bring the right foot back to MOA SOGI A


END: Bring the left foot back to NARANI JUNBI SOGI

"JOONG-GUN" is named in reference to the patriot AHN JOONG-GUN who murdered Hiro Bumi Ito (the (the first Japanese governor-general of Korea).


The 32 movements of the Tul represents the age of Ahn when he was executed in Lui-Shung prison (1910).


End: Bring the left foot to MOA SOGI B

TOI-GYE - 퇴계 / 退溪 is the pen name of the noted scholar Yi Hwang (16th century), an authority on neo-Confucianism.


The 37 movements of the pattern refer to his birthplace on 37-degree latitude, the diagram represents "scholar" as in the Yul-Gok Tul.


End: Bring the right foot to MOA SOGI B

"HWA-RANG" was named after the youth group HWA-RANG originated in the Silla Dynasty in the early 7th century.


The 29 movements refer to the 29th Infantry Division, where Taekwon-Do was developed to maturity.